(Chuck Walker at age 5 picking up his first motorcycle in Malibu, A used 1968 Mini Indian Papoose) 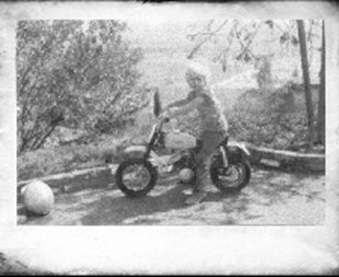 Chuck Walker began his leather career in 2002. Chuck learned and mastered the leather craft. You name it, he makes it from fine Italian leather and exotic skins. Everything from jackets, shirts, vests, motorcycle seats, bar stools wallets and accessories. Whether you were just a regular person with an idea, a celebrity, or a custom bike builder, if you have a vision it most likely could be made.

Chuck was born and raised in Malibu California. His hobbies included fishing, diving, motorcycles, off roading and shooting guns. While growing up in Malibu Chuck did all of these things on a daily basis then as time rolled on Malibu became over built and the ocean became polluted,Chuck stopped doing most of the things he lived for, then one day while stopped in traffic on the Pacific coast Highway, on his way home from work( a daily occurrence) Chuck looked over and saw so many people at the beach you could not see the sand. He then looked around and saw nothing but stopped cars(a virtual parking lot in both directions) Chuck then realized after 40 years living in Malibu it was time to move on to a better place. Within the year Chuck sold his house and moved to the North shore of Oahu, Haleiwa HI, where he loves to fish, dive, ride motorcycles, and off road on a regular basis. The North shore is to Chuck what Malibu used to be. So with all this said Chuck Walker started North Shore Leather Hawaii in 2010. This is a full service leather shop. If you have a vision, call.